Wolxheim, a much coveted village 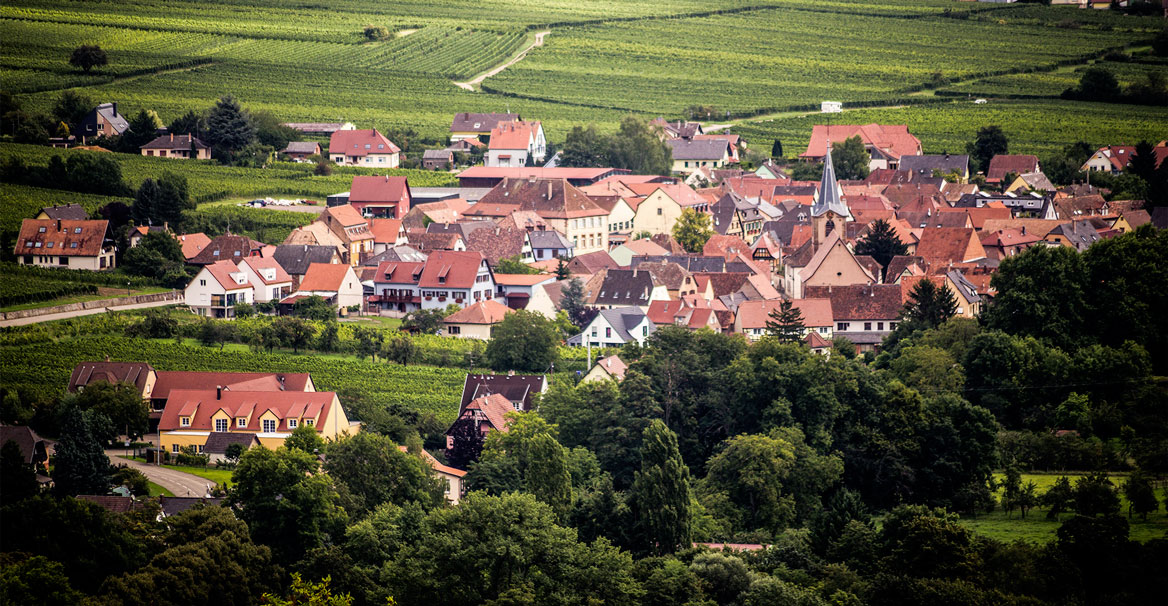 Wolxheim is a quiet wine-growing village located 20 km west of Strasbourg and nestled between the green canal of the Bruche and the Vosges foothills.  It is overlooked by the rock of the Horn, which looks like a cornucopia pouring its wealth on the gentle slopes of the surrounding hillsides.  At the top of Horn, the statue of the Sacred Heart, a symbol of peace, protects the village and the vineyard.

Mentioned as early as 742, Wolxheim probably owes its name to the wolves, as evidenced by the double hook on its coat of arms.  This type of hook was once used as a wolf trap.

The first written documents referring to the vineyards date back to the early Middle Ages.  In those times they belonged to convents and monasteries.  The Diocese of Strasbourg, the abbey of Hohenbourg and the Strasbourg Hospital owned a vast portion of them.

Vauban took an interest in Wolxheim because of its location, close to a river and the presence of a quarry.  In 1682 he had the Bruche canal dug, connecting Wolxheim and Strasbourg, and so doing helped move towards the Alsatian capital the stones used in the construction of its fortifications.  After King Louis XIV’s visit in June 1683, the quarry became known as "Royal Quarries".

Several illustrious citizens came from Wolxheim: Raymond Carré de Malberg (1861-1935), a prominent law professor; Gustave Klotz (1810-1880), who devoted his life to the restoration of monuments from the Middle Ages and adorned the Strasbourg cathedral with the tower "Klotz"; and more specifically, the sculptor Philippe Grass (1801-1876) author of the statues of General Kleber and the prefect Lezay Marnesia that are in Strasbourg.The wines of Wolxheim have gained respectability on the most prestigious tables.  Napoleon enjoyed them particularly, and speaking of Riesling, he called it "my favorite wine".Scattered in the vineyards and partially underground, numerous bunkers (casemates) and fortifications were erected during the German occupation from 1870 to 1918, in order to control the mouth of the Bruche Valley from that high point.Wolxheim rightly so often coveted, ends up in the big league thanks to its high quality wines, rich and generous, reflecting the expression of extraordinary potential in different soils which currently spread over 290 acres.